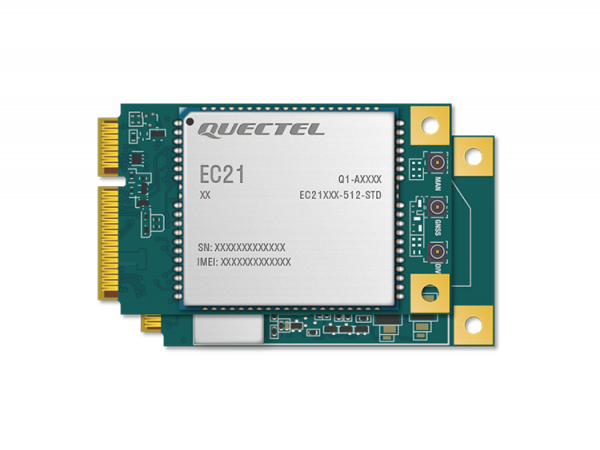 Click here to compare specs
Customers in APAC, EMEA or LATAM can activate and manage the connectivity of their cellular modules directly with us
Learn more

The EC21 Mini PCIe is a series of LTE Cat 1 modules in a standard PCI Express® Mini Card form factor measuring 51.0mm × 30.0mm × 4.9mm, which meets the 3GPP Release 11 standard. The series consists of ten variants to meet various geographical demands, which can be compared via the table above.

The EC21 Mini PCIe provides cost-effective, low-power LTE connectivity, delivering maximum downlink rates of 10Mbps and uplink rates of 5Mbps under LTE, and multiple-input multiple-output (MIMO) technology meets demands for data rate and link reliability. This makes the series ideal for IoT applications which are not reliant on high-speed connectivity but do require the longevity and reliability of LTE networks. It is also backward-compatible with existing 3G networks, ensuring that it can be connected even in remote areas devoid of 4G network coverage.